The cataract occurs as a result of the natural aging process of lens fibres which become opaque over a period of time.

Here, cataract develops as a result of some other primary ocular disease such as chronic eye inflammation or glaucoma.

This occurs as a result of excess intake of oral steroid or putting steroid drops in the eye.

Methods of evaluation of cataracts: 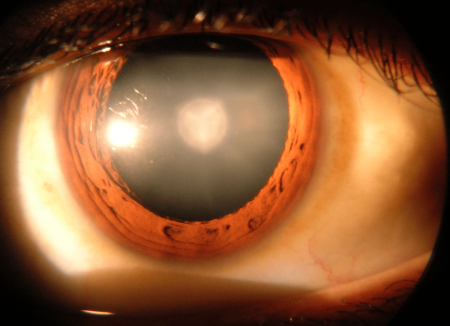 Phacoemulsification is latest technology in Cataract surgery. It is a micro-incisional stitch less operation where cataract is emulsified by ultra sound energy, liquefied & sucked through the phacoemulsifier probe. A foldable intra- ocular lens is then implanted in the eye permanently.

Vision restoration is possible in a short period of time & is least traumatic with early rehabilitation & recuperation.

An intraocular lens (IOL) implant is a synthetic, artificial lens placed inside the eye that replaces the natural lens which is surgically removed usually as a part of cataract surgery.

An intraocular lens (IOL) implant is a synthetic, artificial lens placed inside the eye that replaces the natural lens which is surgically removed usually as a part of cataract surgery.

Monofocal intraocular lens can be used to give clear point focus either at a distance or close up, but one can choose only one focal point.

Multifocal IOLs are popular as they allow correction of vision for both far & near distance.

Trifocal IOLs provides excellent vision not only for near and far, but also for intermediate distances, especially for people who have routine usage of computers.

Gradual diffractive steps on the IOL implant that create a smooth transition between focal points. The IOL bends incoming light to the multiple focal points to increase vision in differing light situations.

Crystalens and Trulign Toric currently are the only US-FDA -approved intraocular lenses (IOLs) that use a method called accommodation, enabling sharper vision at multiple distances for people who have undergone cataract surgery.

An accommodating IOL shifts position with the action of eye muscles and movement to improve eyesight.

This is a monofocal IOL with astigmatism correction built into the lens.

IOLs include filters to protect the eye’s retina from exposure to UV and other potentially damaging light radiation. The eye doctor selects the filters that will provide appropriate protection for the patient’s specific needs.